This project, which took a number of years to complete, arose in response to numerous inquiries received by the Canterbury Historical Society, Canterbury Public Library, and other municipal offices about the locations of burying grounds in town. Most such questions come from people trying to locate the grave sites of their ancestors, in some cases going back 300 years.

The scope of the project was to pinpoint and document graveyard locations, not individual headstones. The timing of our effort was critical, given that some of our early burying grounds—particularly the smallest ones—are becoming overgrown with vegetation and therefore disappearing from sight. As a future enhancement, we hope to link to the photographs being taken systematically by a Canterbury resident of all the headstones in town cemeteries.

The Canterbury Historical Society has been fortunate to have the services and expertise of Mike Sheehan throughout the mapping undertaking. Mike is retired from the Army Corps of Engineers, where he was a biologist and wetland and soils scientist. He traces his interest in cartography to his time as an infantry officer in Vietnam, and later to his self-described lingering “wetlands geek” period. He generously donated his efforts for our cemetery mapping venture. 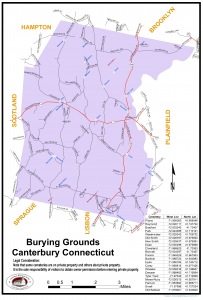 One of the project’s main outputs is a map of known Canterbury burying grounds overlaid on a modern road map of town, with a table of precise, corrected GPS coordinates for the burying grounds. Click on the thumbnail at right to open the new map. Once open, depending on your software and settings, you should be able to zoom in and out on the image.

Earlier maps had shown only approximate locations, as well as fewer burying grounds than we’ve been able to document. During the project, we discovered the locations of three that were previously unknown, leaving three others (Perry, Herrington-Stevens, and North Parish, noted in red on the map) for which we couldn’t confirm locations.

Using GPS technology, we were also able to correct the locations of virtually all previously documented sites. We provided the corrected and new location data to the Canterbury Land Use Office for submission to the state. Apparently state processes stipulate that the town land use office is charged with communicating all new information and corrections to the State of Connecticut for inclusion in its state-wide cemetery archives.

Large format hard copies of the new map are now available for public access during normal business hours in the Canterbury Town Hall at the:

Working with the first selectman, we also hope the map can soon be linked electronically on the map page of the town’s official website.

In an effort to ensure that visitors do not unknowingly enter private property without prior permission of the landowners, please notice the following legal language included on the map:

We welcome your suggestions for needed corrections to the map, and if you know of burials that are not included—even if only a single headstone— please let us know at info@canterburyhistorical.org.