Our hearts are heavy for the family and for our community—both suffered terrible losses that day.

People have been asking us about the history of the house and its architectural significance, so here’s an overview, largely derived from the Canterbury Historical Society’s HISTORIC RESOURCE SURVEY of Canterbury Center, Packerville, and Route 169, published in April 1992 in collaboration with the Connecticut Historical Commission.

Traditionally known as the William Moore house, this house was built circa 1803 in an imposing, elegant Georgian Federal style at the northeast corner of the intersection of what are now routes 169 and 14.  William Moore was a merchant who ran a store in the village center and also served as postmaster. The front porch was added much later, in the 1920s.

As one of the centerpieces of the National Historic District in Canterbury center, the William Moore house is architecturally significant as one of the most elaborately detailed Georgian houses in Canterbury, a role augmented by its prominent location on the corner of the main intersection in the village center. Its projecting center pedimented bay, elaborate corner pilasters on pedestals, and elegant Palladian window represent the height of country Georgian architecture. Given that the window matches the Palladian window on the former First Congregational Church on the green (no longer standing), which was known to have been built by Plainfield architect-builder Thomas Gibbs, it is reasonable to assume that Gibbs also built this house and the other similarly detailed houses in Canterbury. These stylistically related houses include the Elisha Paine house (Prudence Crandall Museum) kitty-cornered across the road, believed to have been built about 1805.

The William Moore house also has historical significance as part of the development of Canterbury as a commercial center around 1800. The convergence of two major roads (later improved as turnpikes) stimulated the establishment of stores, shops, and the offices of professional men. The upper floor of this house at one time accommodated a ballroom where Masonic organizations met. Later in the 19th century, the house became the home of prominent merchant, banker, and politician Marvin H. Sanger, Connecticut Secretary of State from 1873 to 1876. In 1921, it was the home of Lillian Frink when she became one of the first women ever elected to the Connecticut General Assembly, along with four other women elected that same year. 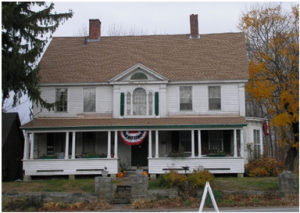